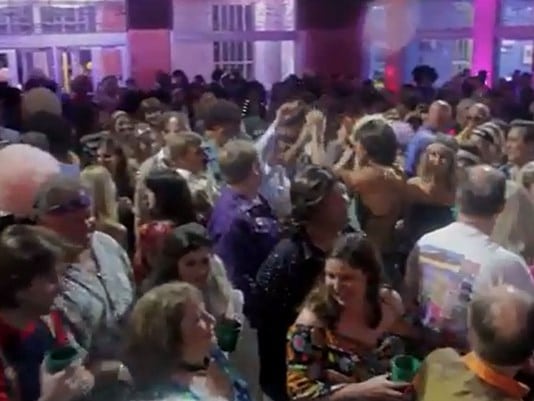 NEW ORLEANS — It’s time to get your platform shoes on for a good cause.

The 12th Annual Lympho-Maniac Cancer Benefit, a fundraiser to help local cancer patients and their families pay for treatment, is aiming for their biggest year yet.

“It’s morphed into a costume celebration party,” founder Chad Landry said. “I’d like to say it’s a celebration of life where everyone takes on the cancer survivor mindset for that night.”

Landry was diagnosed with Hodgkins Lymphoma when he was 20-years-old. He beat the deadly cancer, but had a scare five years later.

“They thought my cancer was coming back and I said, ‘it this comes back a false positive … I’m having the biggest 70’s party you could possibly imagine.” Landry said. “That was the birth of the first Lympho-Maniac party.”

Since the fundraiser’s inception in 2003, nearly a million dollars have been raised to help fight cancer.

“Last year we helped 50 families,” Landry said. “Each one took home a $1,000 grant they could use for anything; their healthcare bill, one guy used it to fix a leak in his roof, another guy used it for groceries.”

The party has attracted plenty of celebrities over the years, including local restaurateur Al Copeland Jr., who live the event so much he’s joining the cause.

“Last year I was invited to his party for the first time and I’ve not been to a party that represents a Copeland’s party like this in my life,” Copeland said. “This guy knows how to do it.”

Copeland also loved the cause, considering his iconic father and Popeye’s founder Al Copeland Sr. died from cancer. So this year, he’s teaming up with Landry by providing all the food for the event.

“Cancer research and helping people through their troubling times of navigation and trying to find a cure to kick cancer’s butt, that’s in my DNA now,” Copeland said. “And since my father passed 8.5 years ago, that’s been our mission.”

The money all goes to patients in our area.

“That’s our big thing: Keep it local,” Landry said. “Help people you’re going to see at church or school. I think we’ve done a pretty good job of that.”

To qualify for a $1,000 grant, you have to be a patient at East Jefferson General Hospital or have someone in your family being treated for cancer. To apply, visit the Lympho Maniacs website by clicking here.

The remaining tickets for the March 18 party can also be purchased on their website.